Initially we were only going to spend one night on Isabela Island and that turned out to just not be enough! We decided once our overnight trip to Isabela was over we would return to Santa Cruz Island and see if there was anyway we could possibly postpone our flight for a few more days. With great success at a very cheap price of $15 per flight changed we were ready to return to Isabela island for a few more days.

Isabela Island has a separate island tax to visit each time you go. The cost is $10 per person. We got lucky and explained our situation and they kindly let us slide without having to pay a second time. 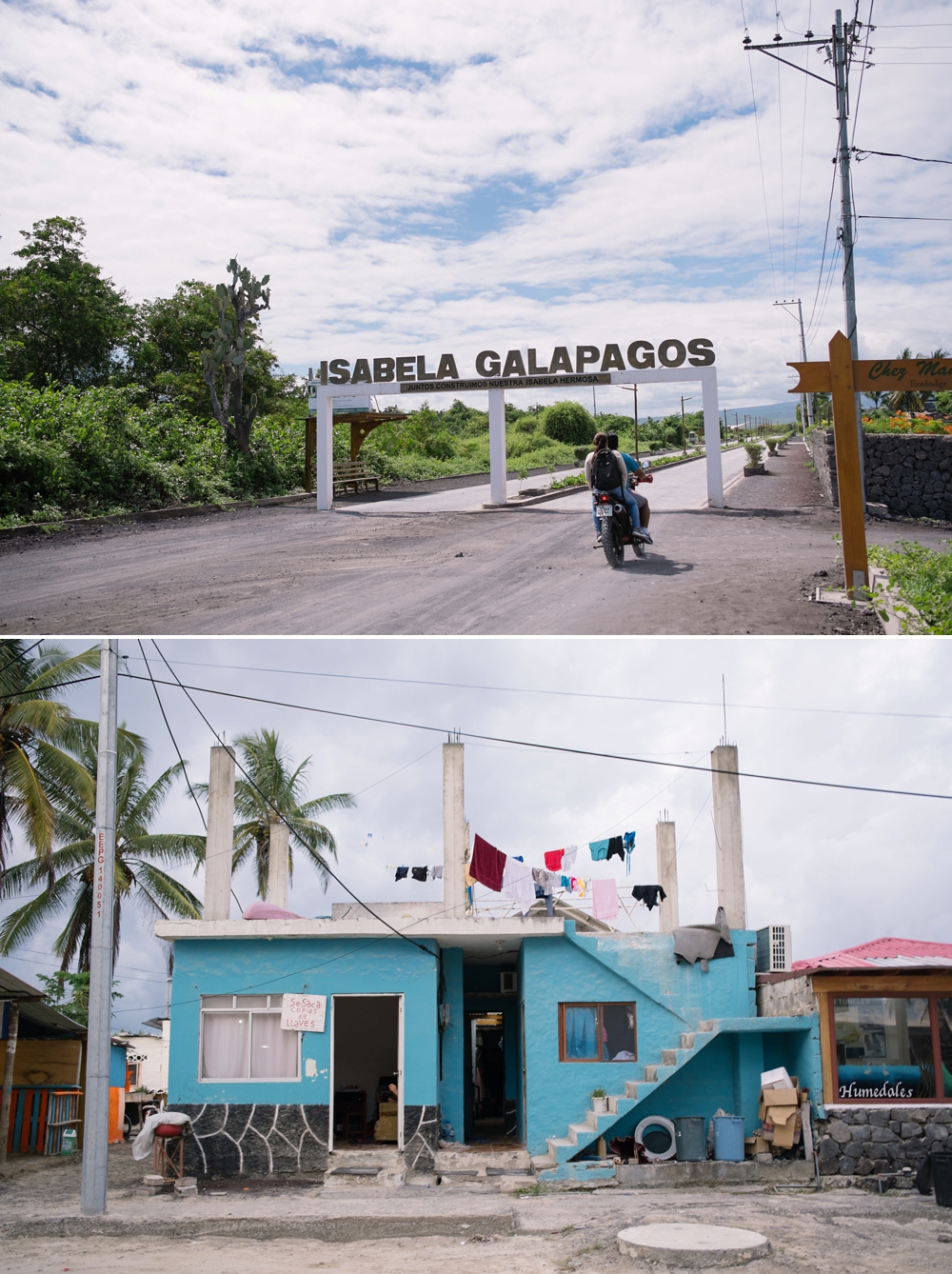 We went on the Los Tuneles tour where we snorkeled in a lagoon with Sea Turtles, White Tip Sharks, Sting Rays and so many fish! We also went snorkeling at a spot in the ocean and got to meet the cutest Galápagos penguins! My heart was beyond happy! Los Tuneles itself is a place where you can walk on the actual arches and tunnels that the lava from the flowing volcanoes has formed in the ocean and it creates a wild and beautiful effect! 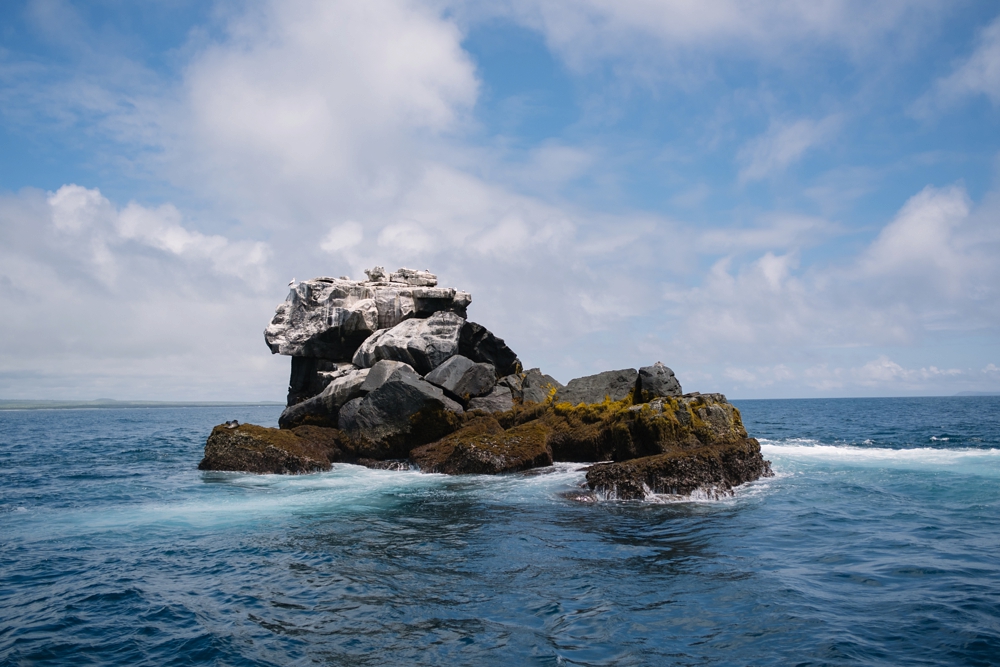 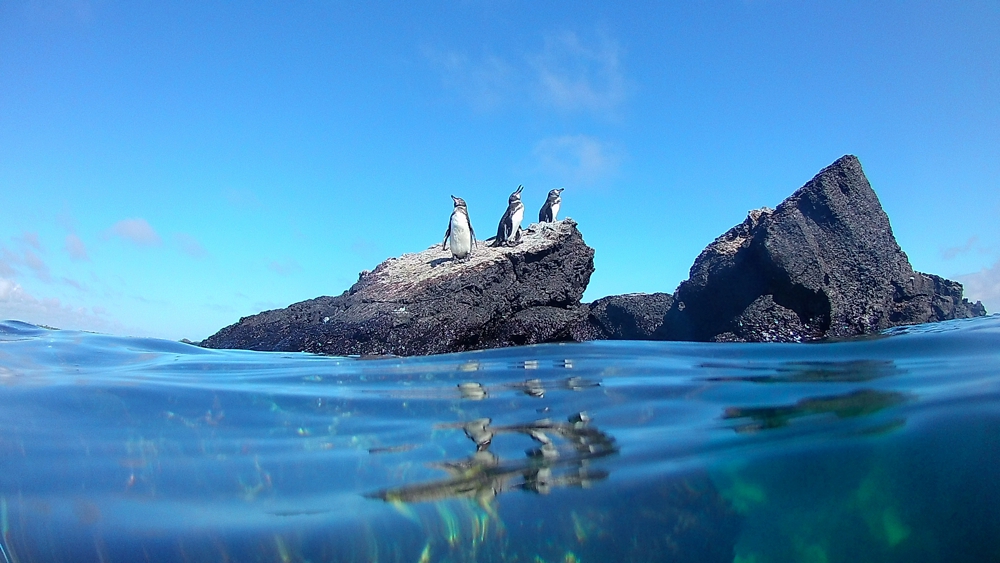 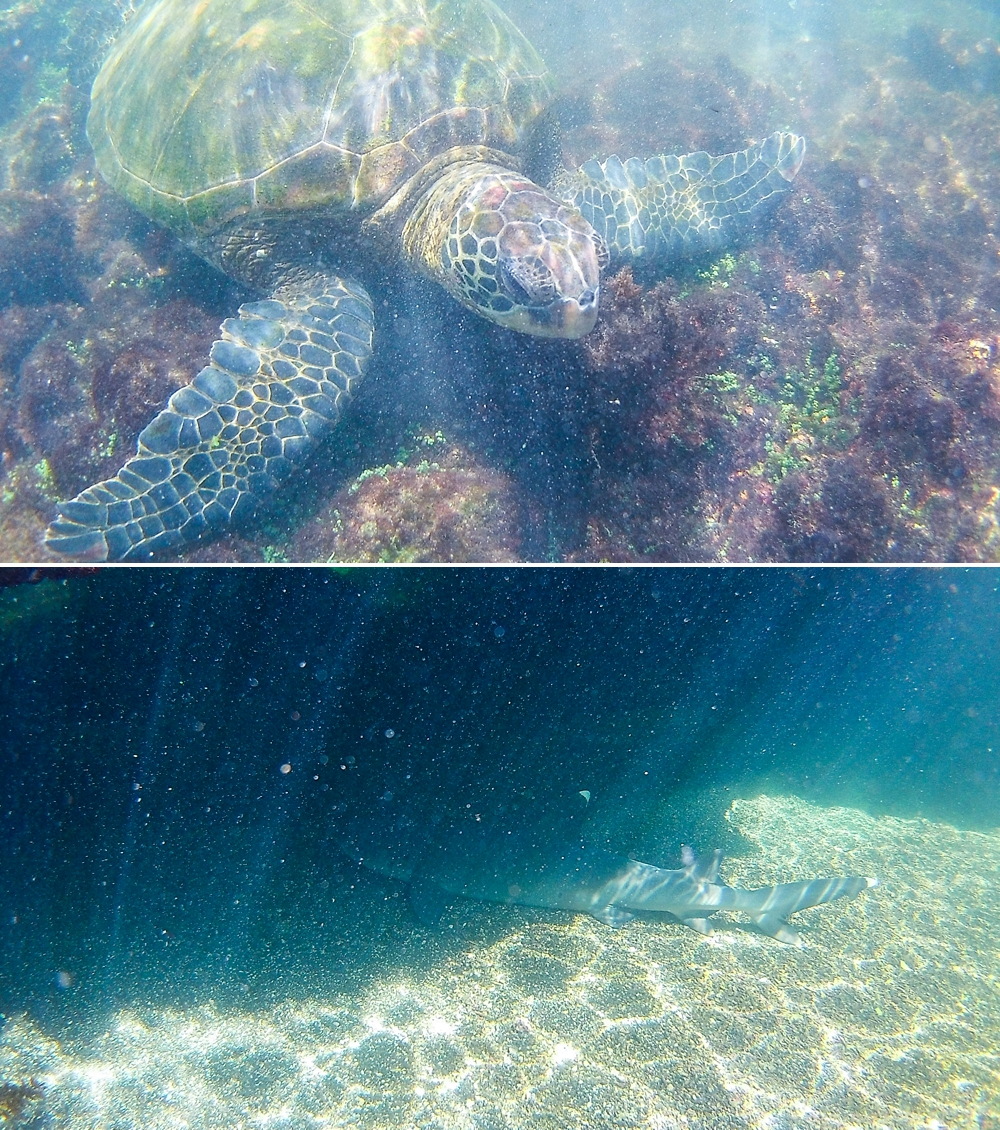 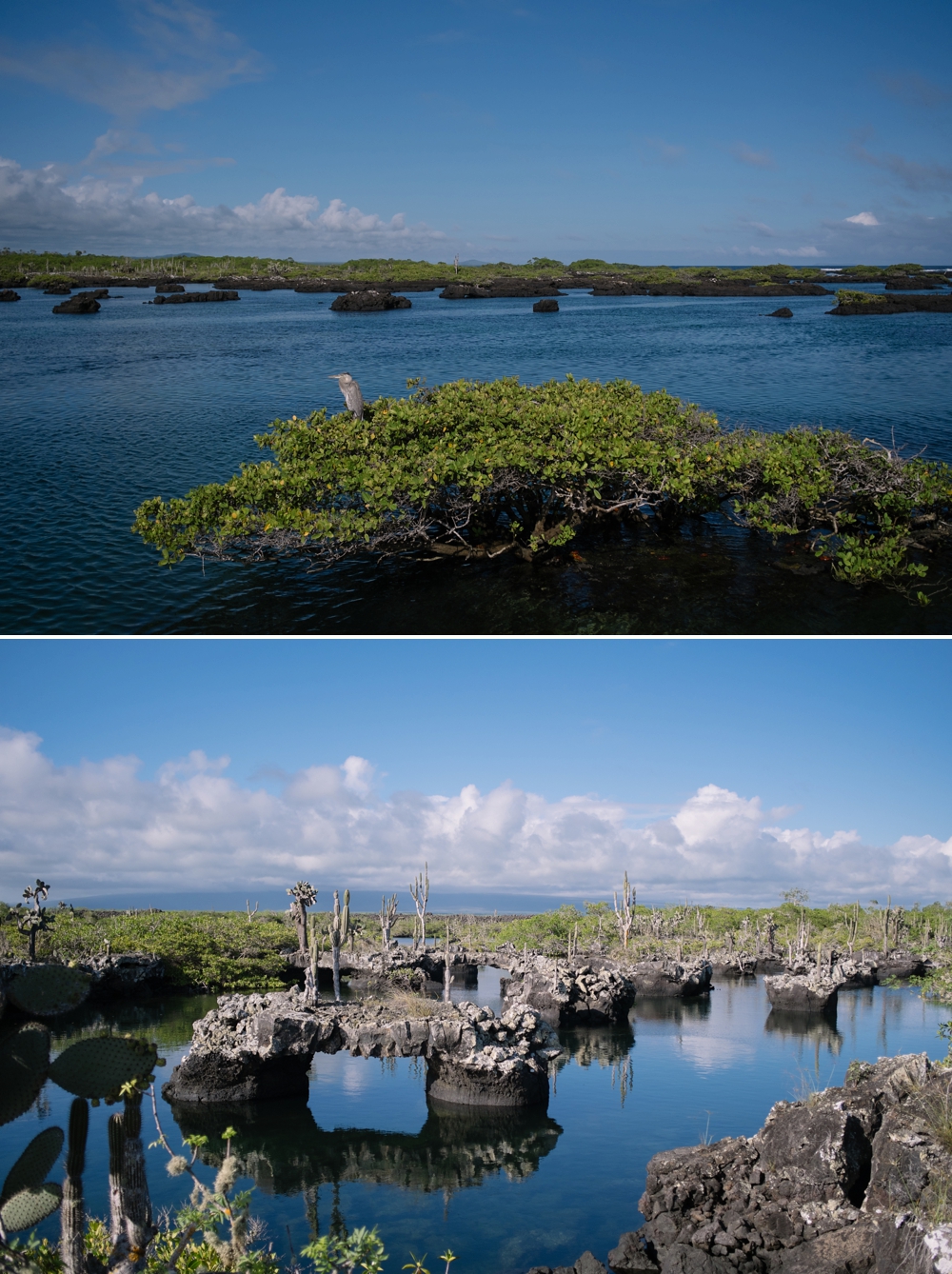 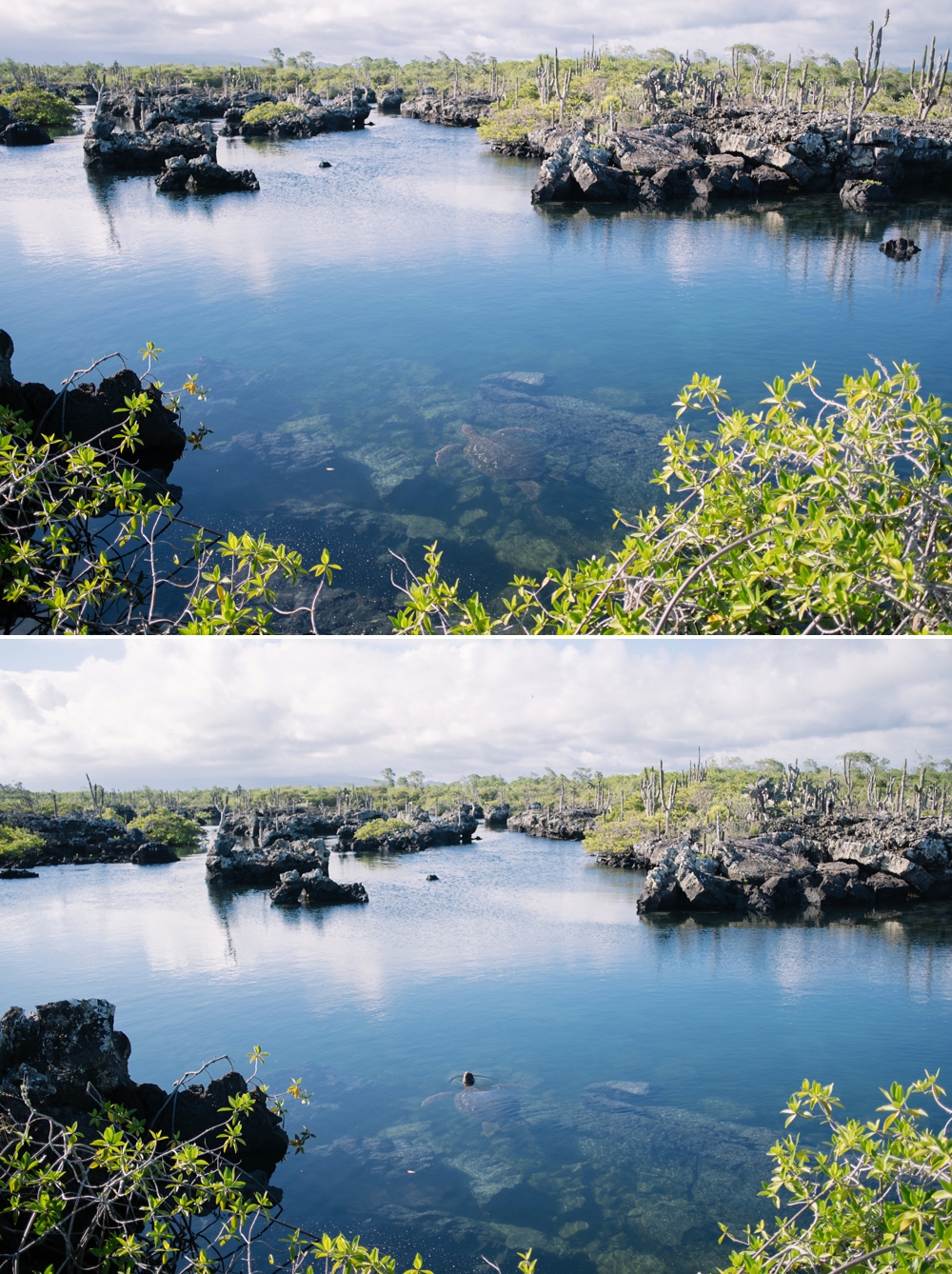 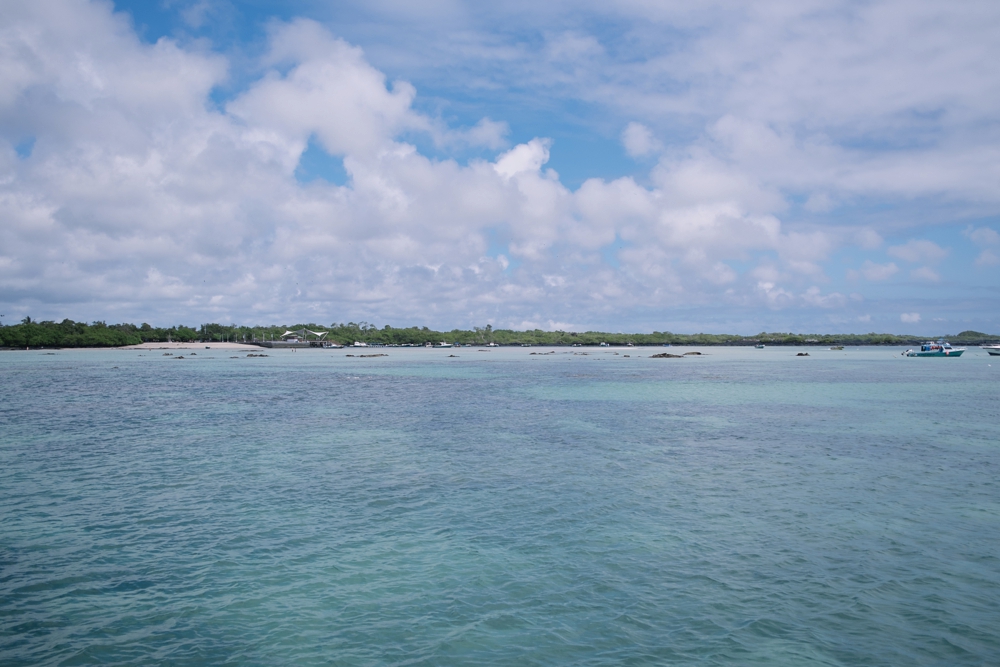 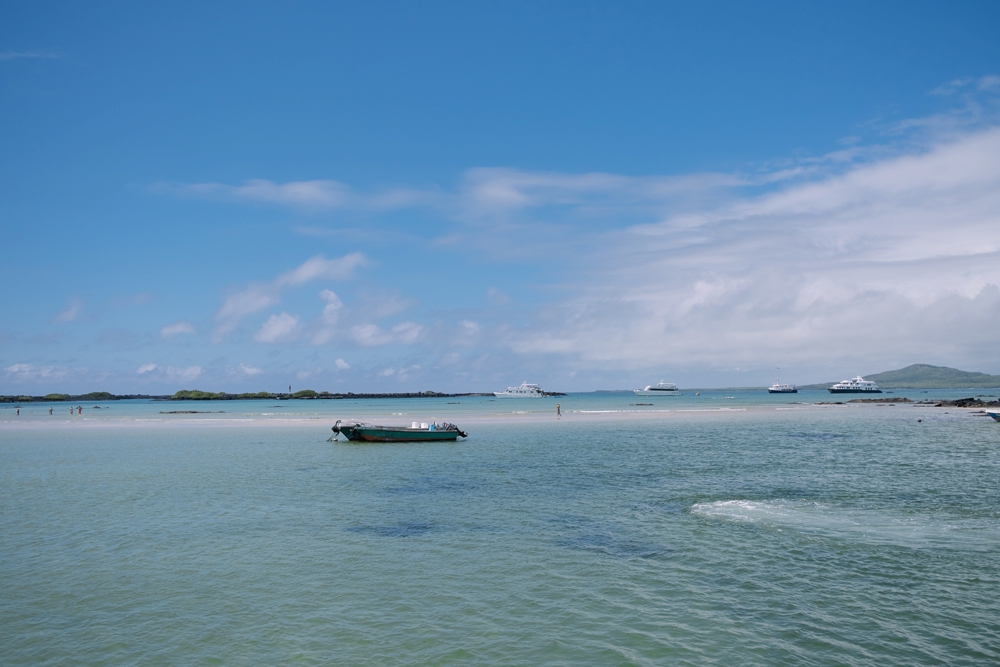 The next morning we visited the Flamingo lagoon with not much luck as we didn’t see but a couple of Flamingos from far away but it is free to access so you can always go back by anytime and see if you might catch a glimpse of them. Isabela Island like the other larger islands has a Tortoise Sanctuary and Breeding Center that is free to visit as well with the sweetest giant Tortoises! We went super early in the morning and had the place to ourselves. 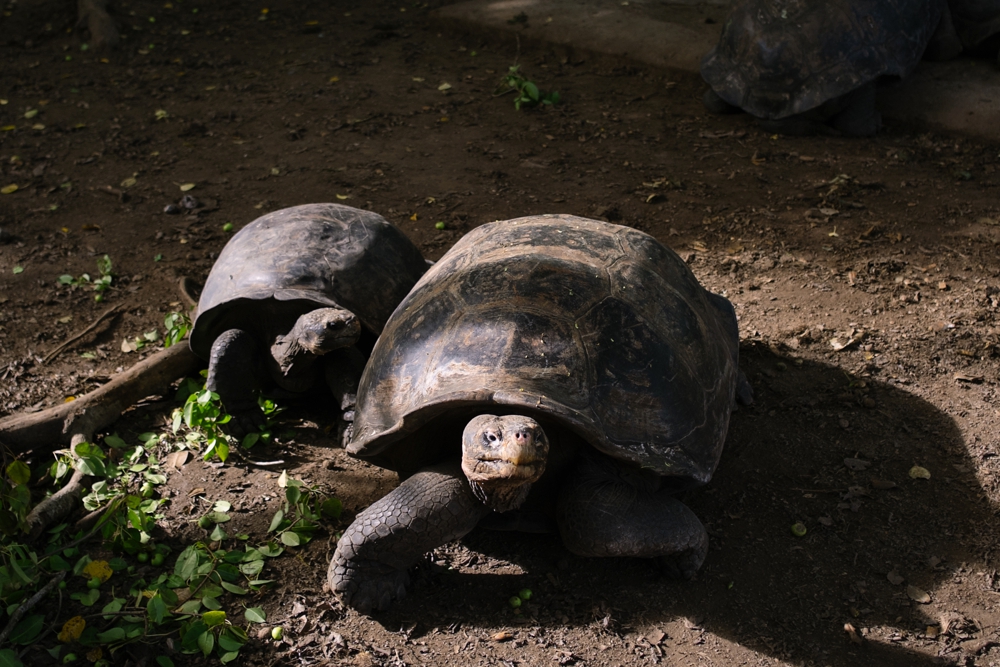 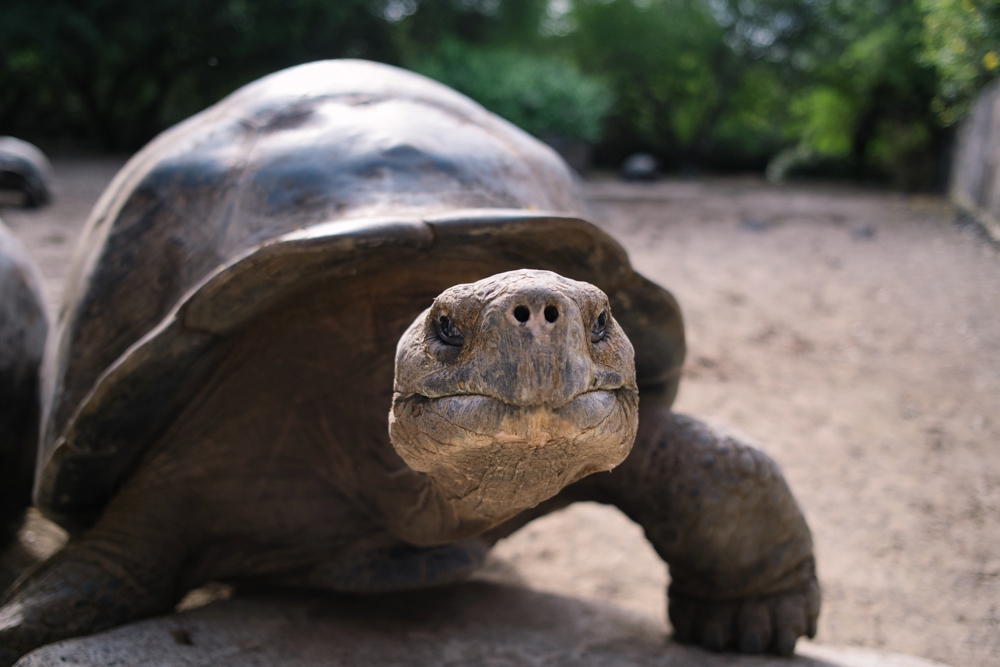 We also visited a place called Las Tintoreras which you have to do as a part of a tour. There we saw Sharks huddling together in the small canal and the rocks had plenty of male Galapagos Iguanas bathing in the sun as they started to shed and show their colorful skin for mating season; the females are smaller and black. We went snorkeling as a part of this tour and saw several Sea Turtles, fish and Starfish. It was fun but definitely didn’t see as much at this location as we did the day before. 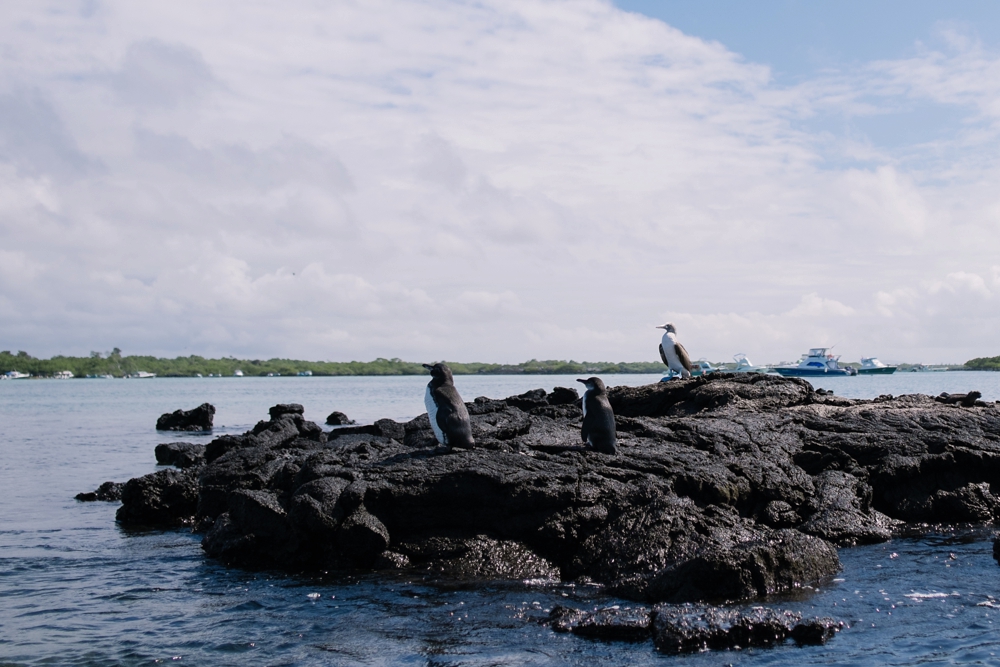 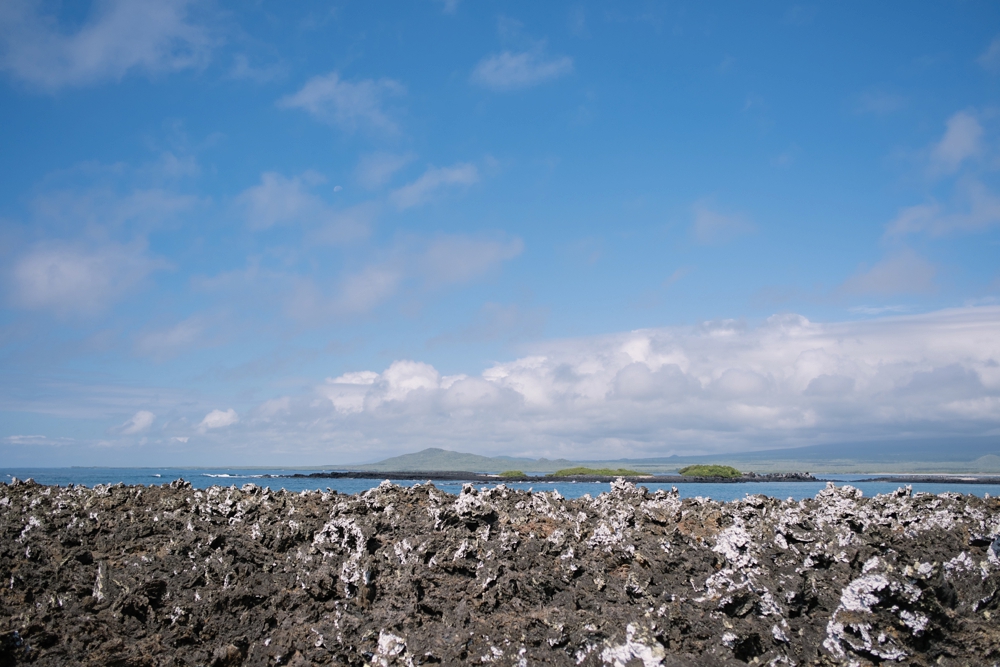 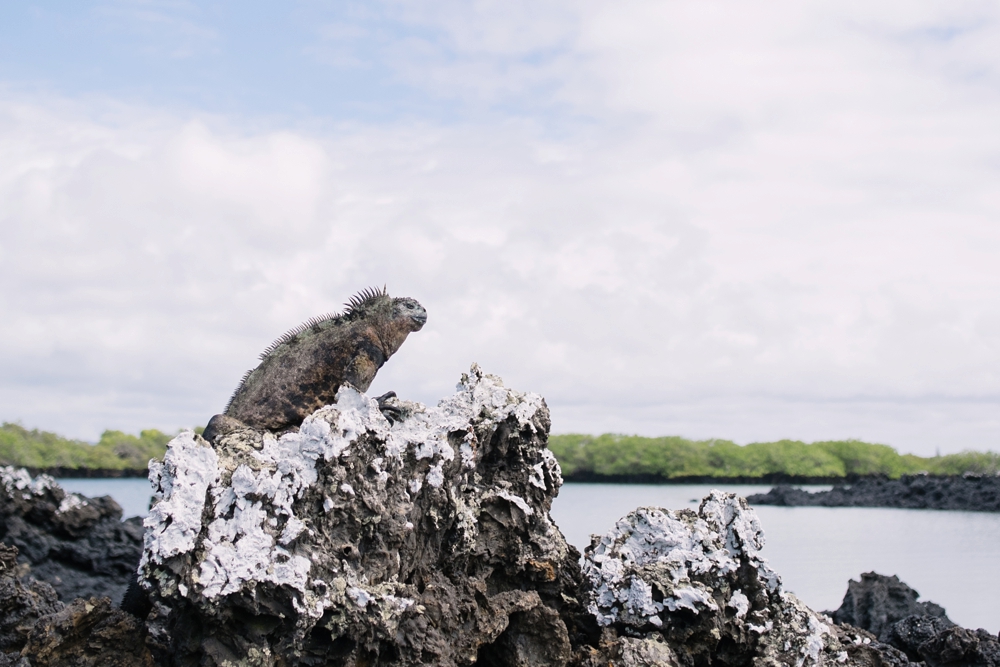 By far the best spot to snorkel for me personally was Concha Perla. This area is right by the docks as you arrive to Isabela Island and you can access it completely free apart from the mask and tube rental which was about $5 for the whole day. We visited this spot a few times and saw countless species of fish and schools of fish, Giant Sea Turtles, Sharks, Sting Rays, Galapagos Penguins floating on top of the water before quickly diving in and speeding off, we saw Iguanas swimming along looking like mini godzillas, we aw Star Fish and Octopi, and not to mention the Sea Lions that were always making their debut like the sea puppies that they are.

I can’t recommend this spot enough and if you go, go early in the morning! 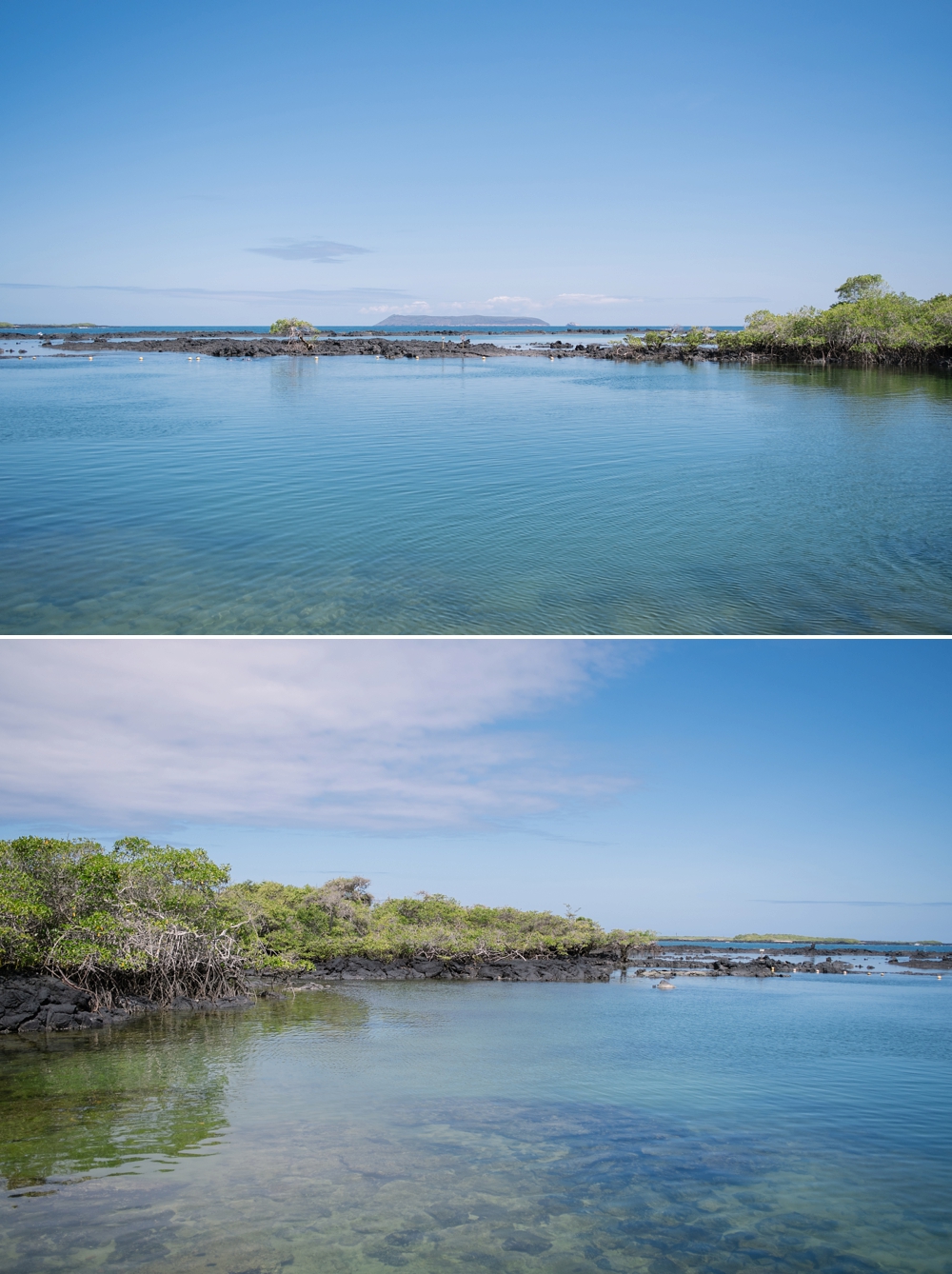 Once we had returned to Isabela Island again and knew we had a few days there, I took a day to relax and Jorge (check out his blog) went on his own little bicycle adventure to Mirador Los Tunos. We met back up in the evening to watch the sunset over the ocean while relaxing on hammocks enjoying a coconut. It just doesn’t get any better than that!

Isabela Island has several volcanos so we decided we would climb one of them. Again, you have to go with a tour and I think it’s a wise decision anyway as the land is quite vast and as a whole the islands are a nature reserve that needs protection from humans. I agreed on the hike under the impression is was about 2-3 hours long! Hah!!! I have since learned not to trust what anyone tells me and research the crap out of every single activity before I agree to anything.

We got to the start of the trail and the guide says it’s approximately 16ish km and about 5-6 hours long! Oh my sweet baby Jesus! I inhaled and took my first step and then my next and then my next and had my inhaler handy because without a doubt I needed it along the way. About an hour into the walk it started raining… no… it started pouring! We were absolutely drenched! This was before we had our rain jackets and didn’t think to bring an umbrella… yup…. we had a towel but that got soaking wet and dripping within minutes!

Well we were already committed and the rain subsided after a little bit leaving us wet and well… wet. We continued on! We arrived at the Big Volcano, Cerro Negra and this crater is massive, over 6 miles wide. 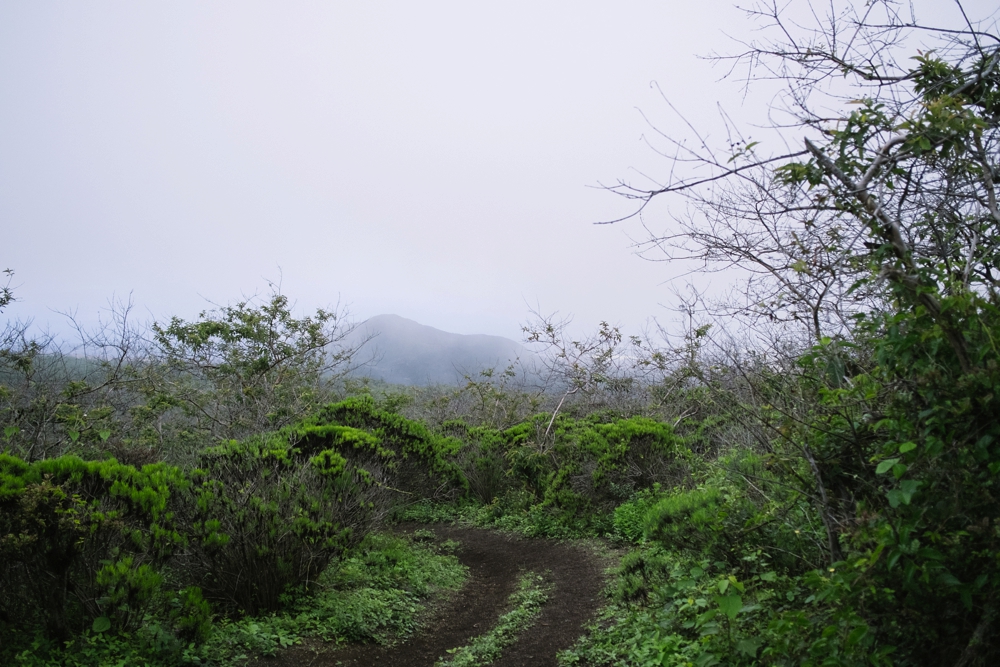 I just stood there as my eyes had to adjust to the width and depth and overall distance of the crater! Incredible! 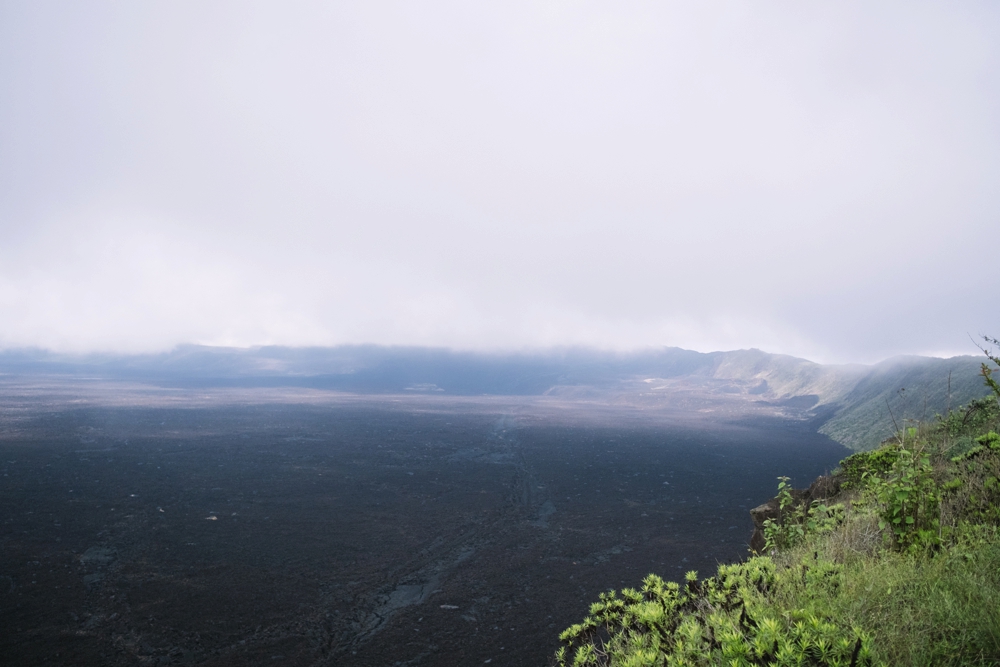 We marched on! Next we hiked to Volcan Chico or the small volcano and it was small and red from the mineral deposits. We arrived to another amazing view and stopped for lunch but the weather wasn’t done with us yet. It started pouring again, the largest raindrops I have ever seen or felt and this time it only stopped for about 5 minutes before it would start up again with a vengeance. We walked back in the pouring rain and just beyond soaking wet. Overall it took about 6 hours to hike there and back. 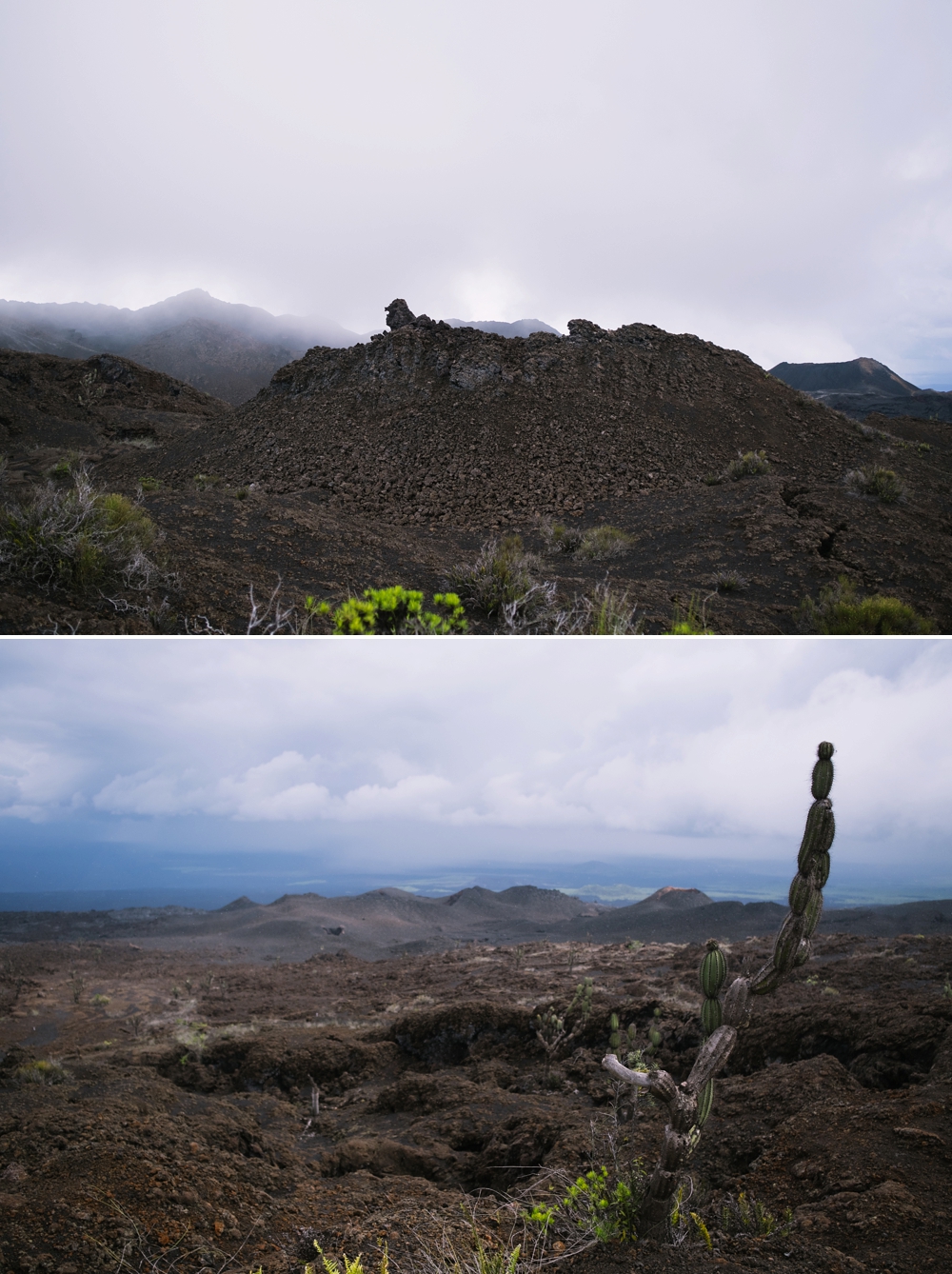 Isabela Island is a gorgeous and magical place and I am definitely glad we got to spend more time here. A couple things to note about the island though. Most places only take cash including tours and ferries and there aren’t any ATMs on the island. So you need to be sure you get enough cash from Santa Cruz Island before you go!

I would also like to make a note about the Galápagos Islands and nature reserves in general. I own a drone and I am a photographer so I really understand how tempting it is to see and take video from above. A couple things on this matter though, it disturbs the wildlife especially the birds, and more importantly it is illegal in almost every nature reserve in the world to fly a drone. So don’t be an asshole! Don’t be that person that just completely disregards the safety and respect of the place you are visiting just to get a shot. It’s not worth it!

Another thing is that since the whole of the Galapagos is considered a nature reserve it is also illegal to take ANYTHING from the islands. That means seashells, rocks including lava rocks, sand, water or anything at allllll! When visiting this place, remember it is a place to respect and take care of and we should all try to live by that while traveling anywhere not just to the Galápagos Islands!