We flew into Baltra Island next to Santa Cruz Island and had planned to spend our first few night in the Galapagos on San Cristobal but let me tell you it was stressful and we had to rush like crazy.

Baltra Island literally had a tiny airport and nothing else so when you arrive you of course have to go through customs to scan every bag and pay the $100 Island fee. After that everyone waits while they manually load our bags onto the pickup belts but no one was allowed to take anything yet as they bring a sniffer dog in to check every single bag.

This is important but we were stressing out about the fact that our flight landed at 11am and we needed to be on the ferry to San Cristobal by 2pm (the last one of the day). While this seems like it should be manageable let me just tell you that once the sniffer dog is done and you grab your bags then everyone has to get on a bus ($5) that takes you to the ferry (approximately $2-$3) to Santa Cruz’s island.

Then you can take a bus or a taxi ($25) to the town Puerto Ayora, which is about an hour away, we were in a crazy rush so we took the taxi and boy did he fly!

We made it to the port by about 1pm and were told that all the seats for all the ferries were sold out! We were stuck! We had already booked our place on San Cristobal and honestly we figured we would be more likely to just not make it in time than the possibility of no space on any of the ferries.

But once again Jorge did his magic and started speaking with them in Spanish and finally we came to an agreement that if we also purchased our return ferry ticket $30 per person each way (to use 3 days later) they would squeeze us on. Phew! They wanted cash! We didn’t have that much cash on us! By now I am sweating cause it is hot AF outside! I run to the nearest ATM and run back to pay! We were so relieved that we would be able to make it on the ferries and I’m pretty sure we were running off pure adrenaline at that point!

We were so concerned about just getting on the ferry that I didn’t even think about the ride itself and if I would get sick. I get pretty seasick and I really didn’t know what to expect because I have been on ferries before but they were all bigger boats that go at a slower steady pace. Hah! The ferries that take you from island to island here are smaller speedboats and they tear through the water at an insane pace making everyone and everything bounce around and float through the air before slamming back down.

For reference sitting closer to the front of these boats is much rougher and bumpier. I felt like my insides were being completely rearranged and this was a 2 hour boat ride! I had to make sure to stare out the back of the boat and keep breathing through my nose.

I found that, for me, snacking is a good motion sickness deterrent, maybe it’s just because I love food so much. So out came the cheese Doritos! Yup! They are my new travel comfort food and I have zero shame. They settle my stomach every time!

If you don’t have any tricks to help you out you can always take Dramamine but sometimes I just don’t want to take that because it knocks me out for the rest of the day, another option is to simply take the little plastic bags they hand out of the boat for those like me. I still took them just in case because you never know. Lol

After 2 painstaking hours we arrived at the gorgeous island of San Cristobal and were met by the rather large greeting crew of Sea Lions! Ahhhhh this was what I had been waiting for! The water was just gorgeous and it was getting closer to sunset! We rushed to our hotel and put our stuff down so we could come back and walk around a bit.

There were different kinds of birds flying around and sea lions all along the rocks by the port. Little black and red crabs propped up as the tide rolled in and the Galapagos iguanas everywhere! Whoa! I was already mesmerized! 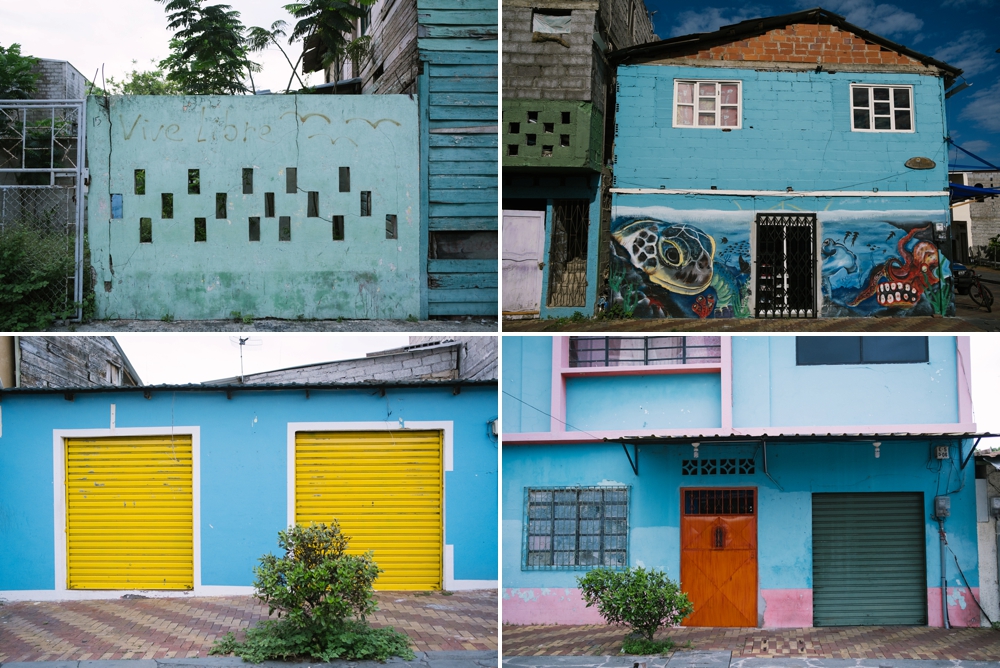 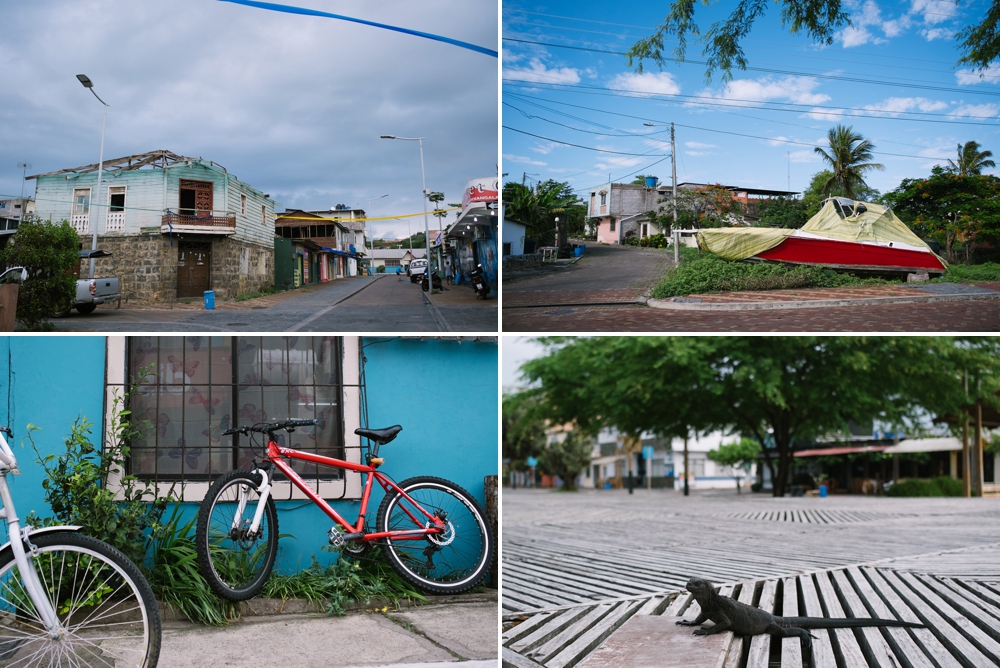 Puerto Baquerizo Moreno is small town and everything is super easy to navigate by foot, there are other places on San Cristobal island that you can visit like Puerto Chino by taxi, walking or bike but is a bit far but you can also take a day tour around the island. 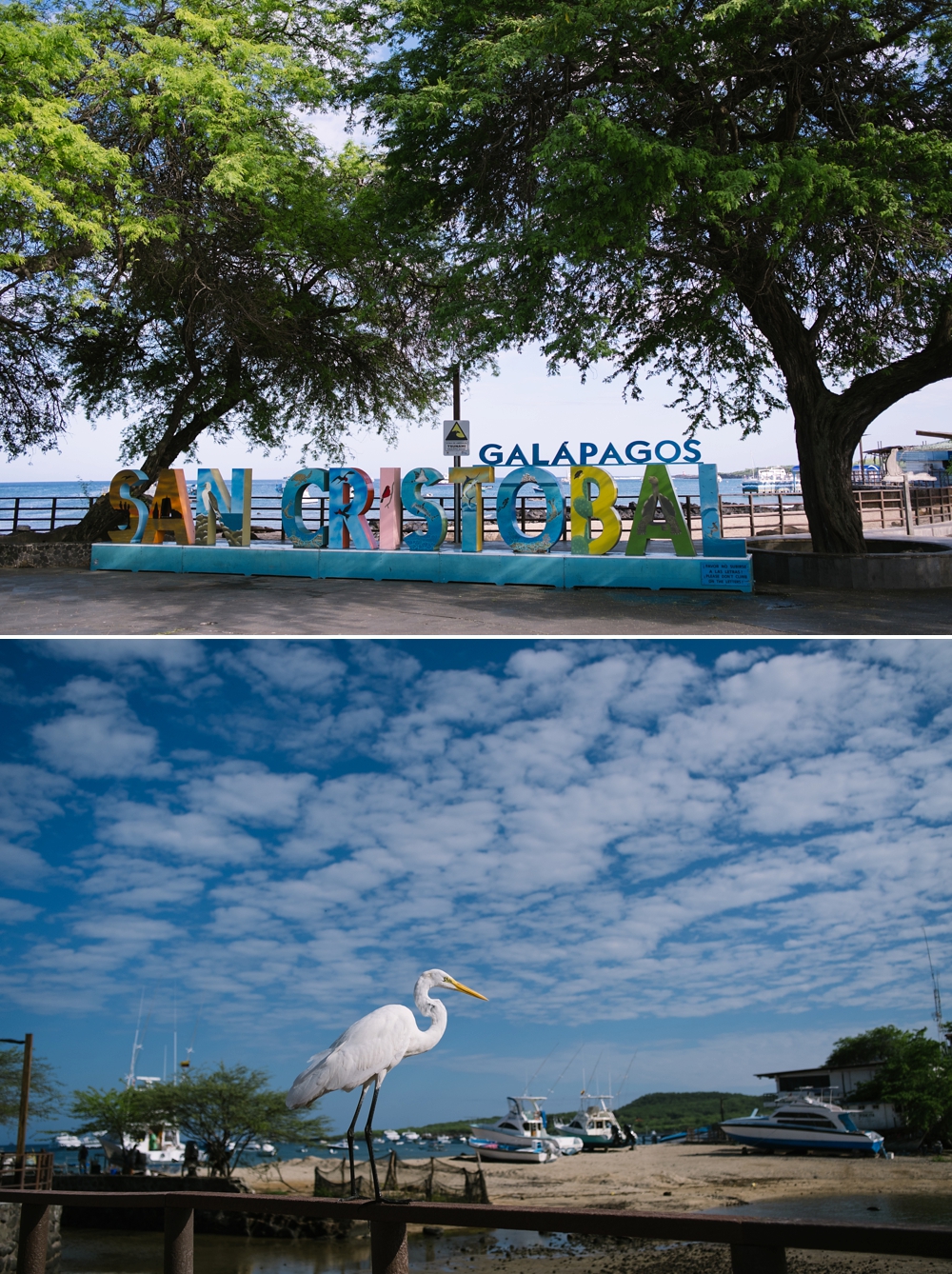 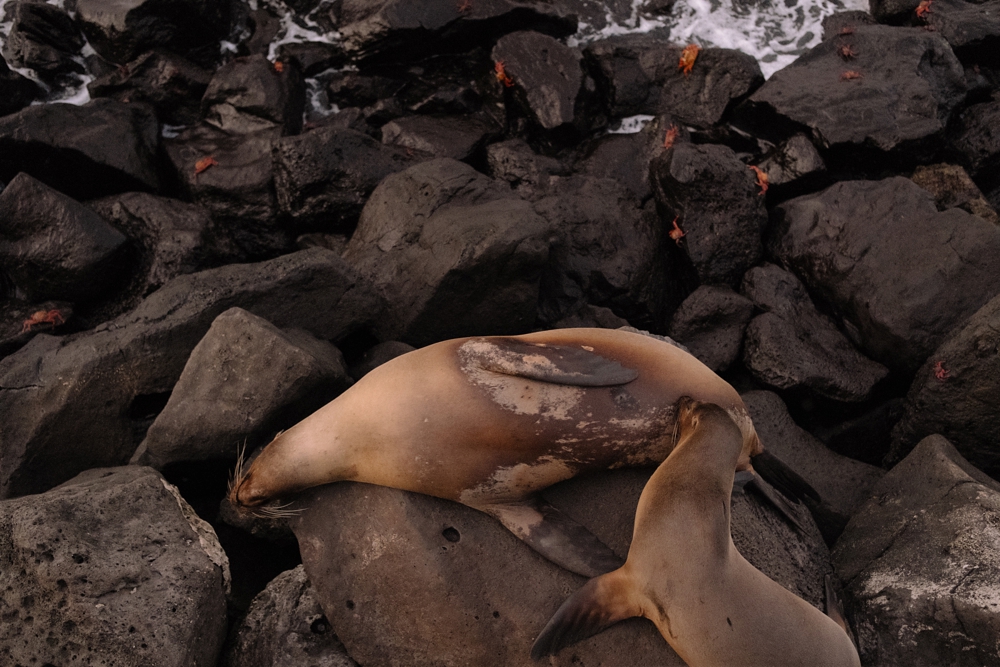 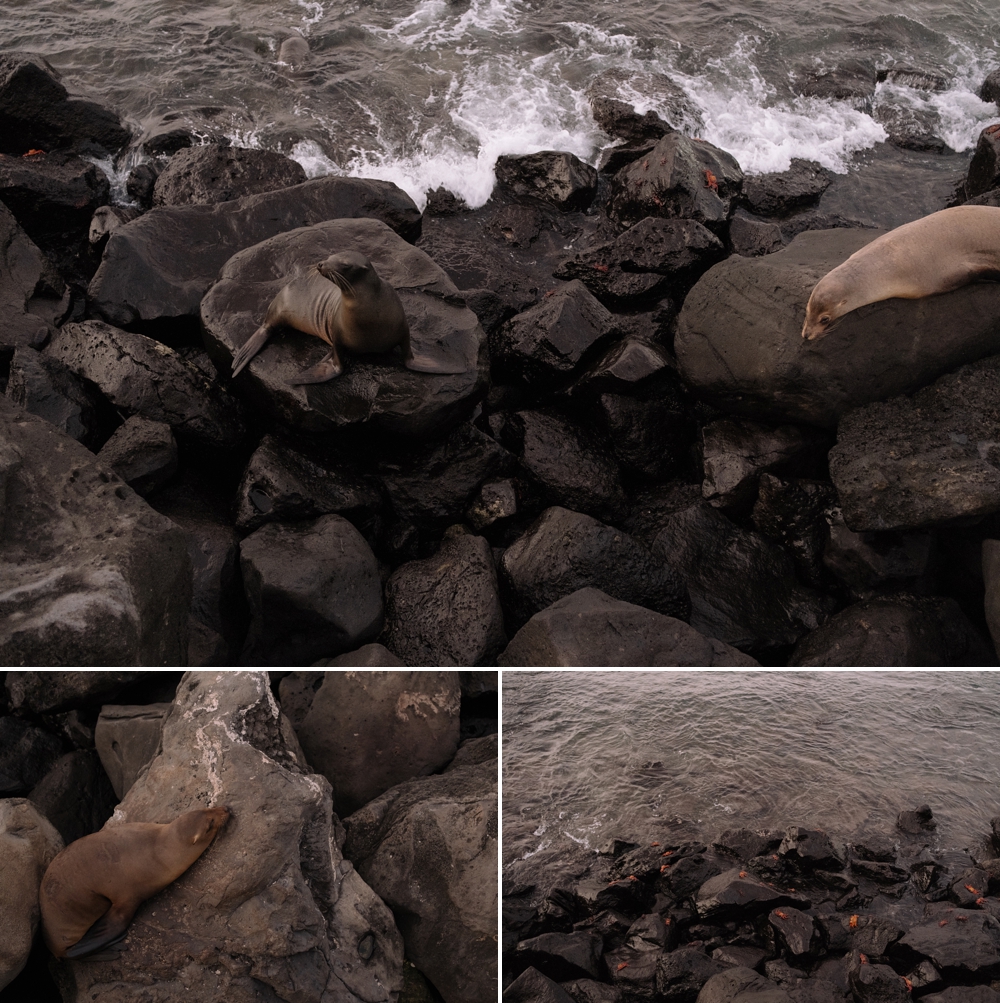 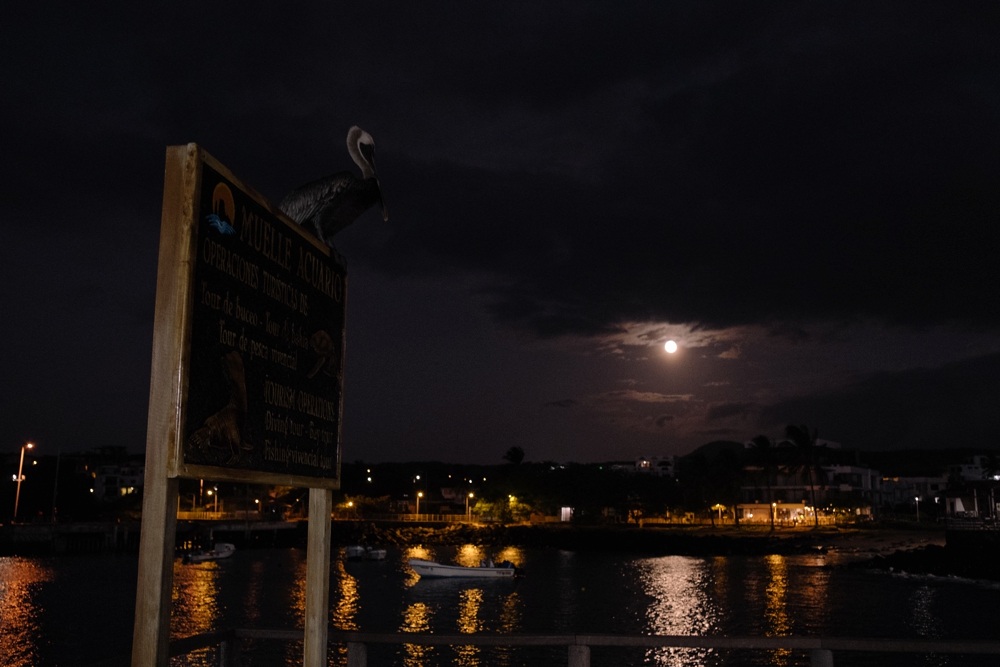 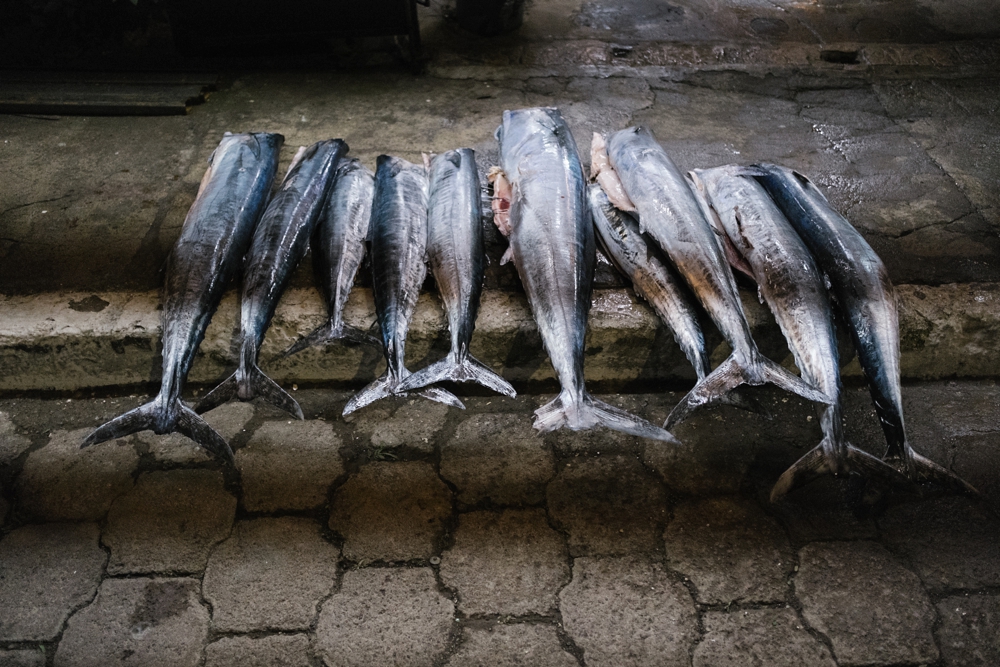 We did end up doing a 360 degree tour of San Cristobal island and while our guide himself wasn’t great it was a fun experience. We went snorkeling at Rosa Blanca and León Dormido or as the locals call it, Kicker Rock. One of the things that has been on my bucket list for a loooong time is to swim with sharks, well at Kicker rock we saw and swam pretty close to some Galpagos sharks and Hammerhead sharks and it was incredible and I found myself inhaling water at my excitement! Lol

One of the days on San Cristobal I hiked up to the Mirador Cerro Tijeretas (lookout point), I mean there is a path but it is quite a steep walk and the sun is so strong in the Galapagos it is no joke! I discovered very quickly the importance of reapplying sunscreen regularly and making sure to drink enough water because after a couple of hours I started to get a migraine and even though you might think you have enough sunscreen on, you probably don’t.

Between the snorkeling, hiking and beach days and just general sun exposure I had managed to get sun poisoning! Like what?!? Not even just a bad sunburn, nope! This was a whole new level! My legs were swelling up and breaking out into a rash and were beyond painful! My poor pasty white legs were just not used to this much sun. I drank so much water, tried to keep them out of the sun as much as possible and still applied sunscreen and so much lotion. It took more than a week for my legs to finally calm down. 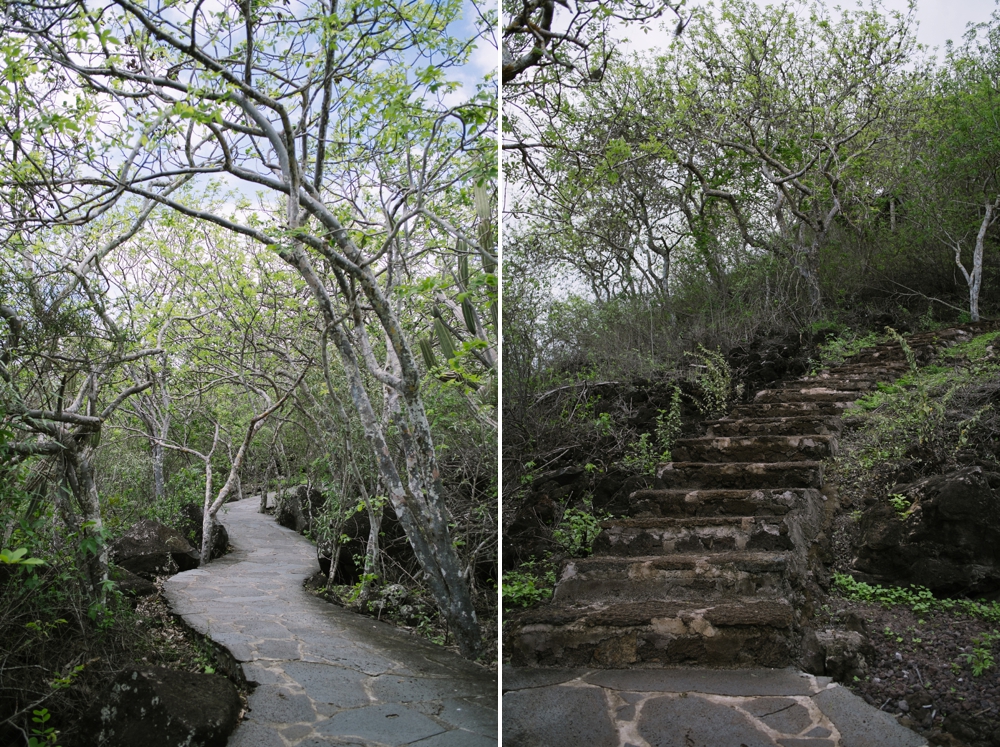 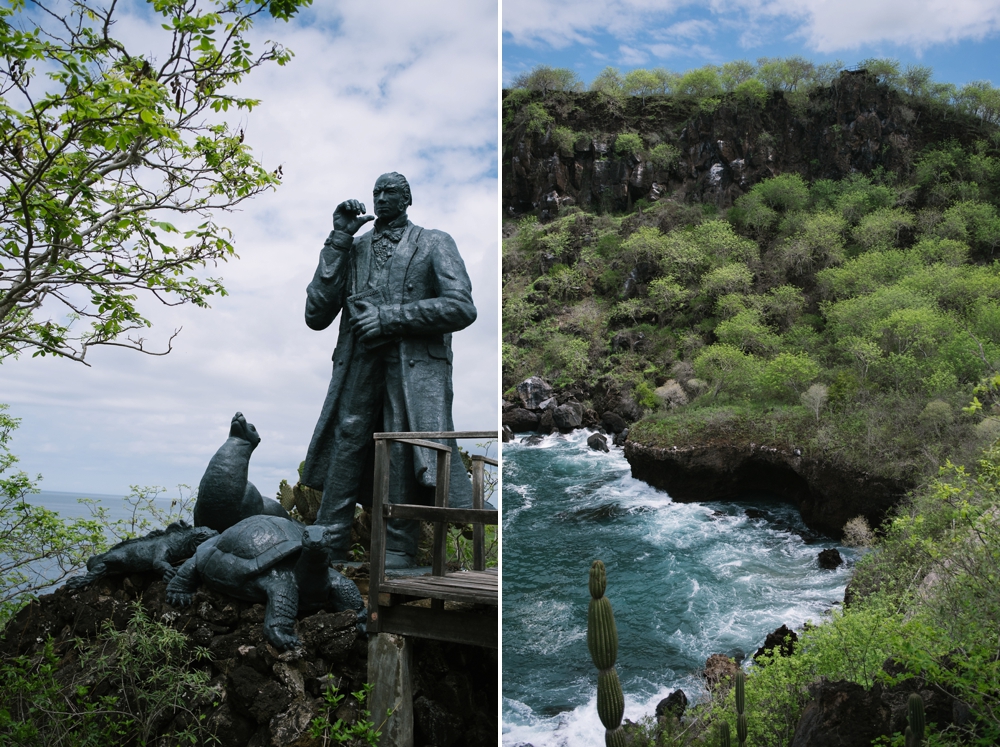 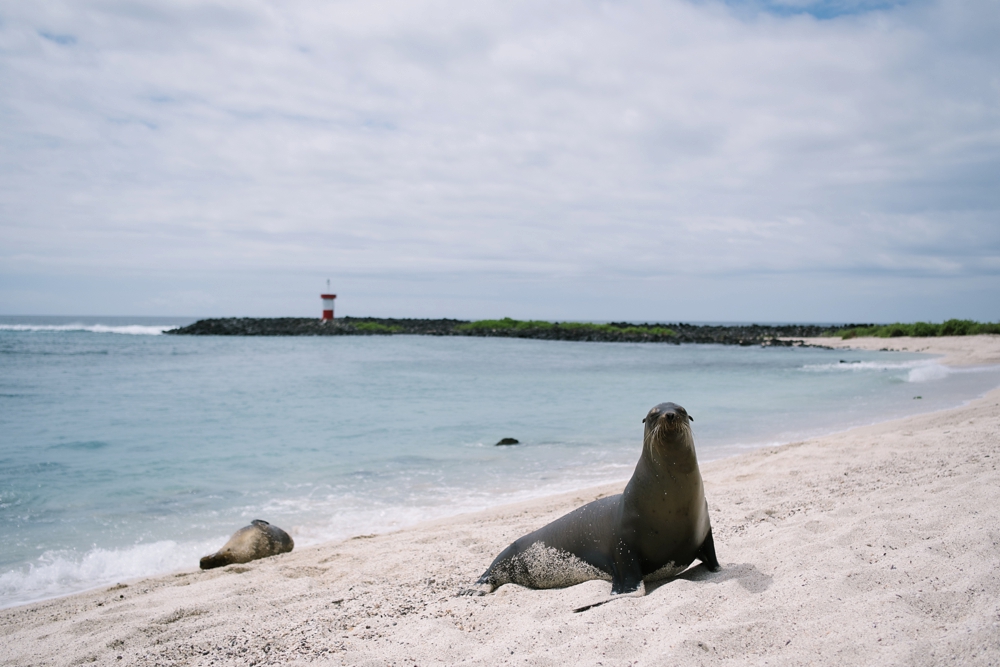 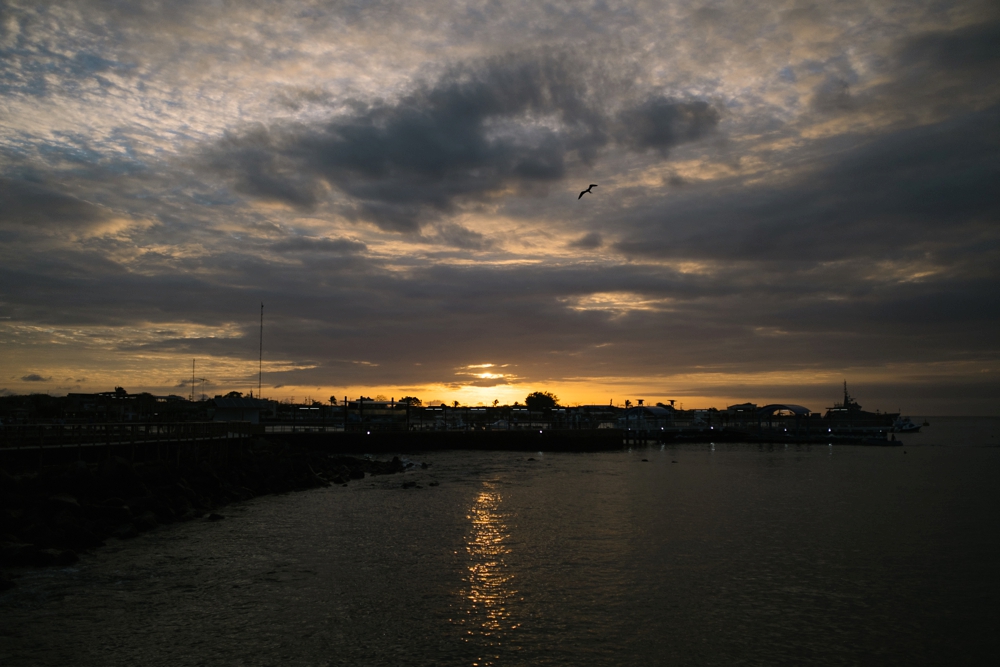 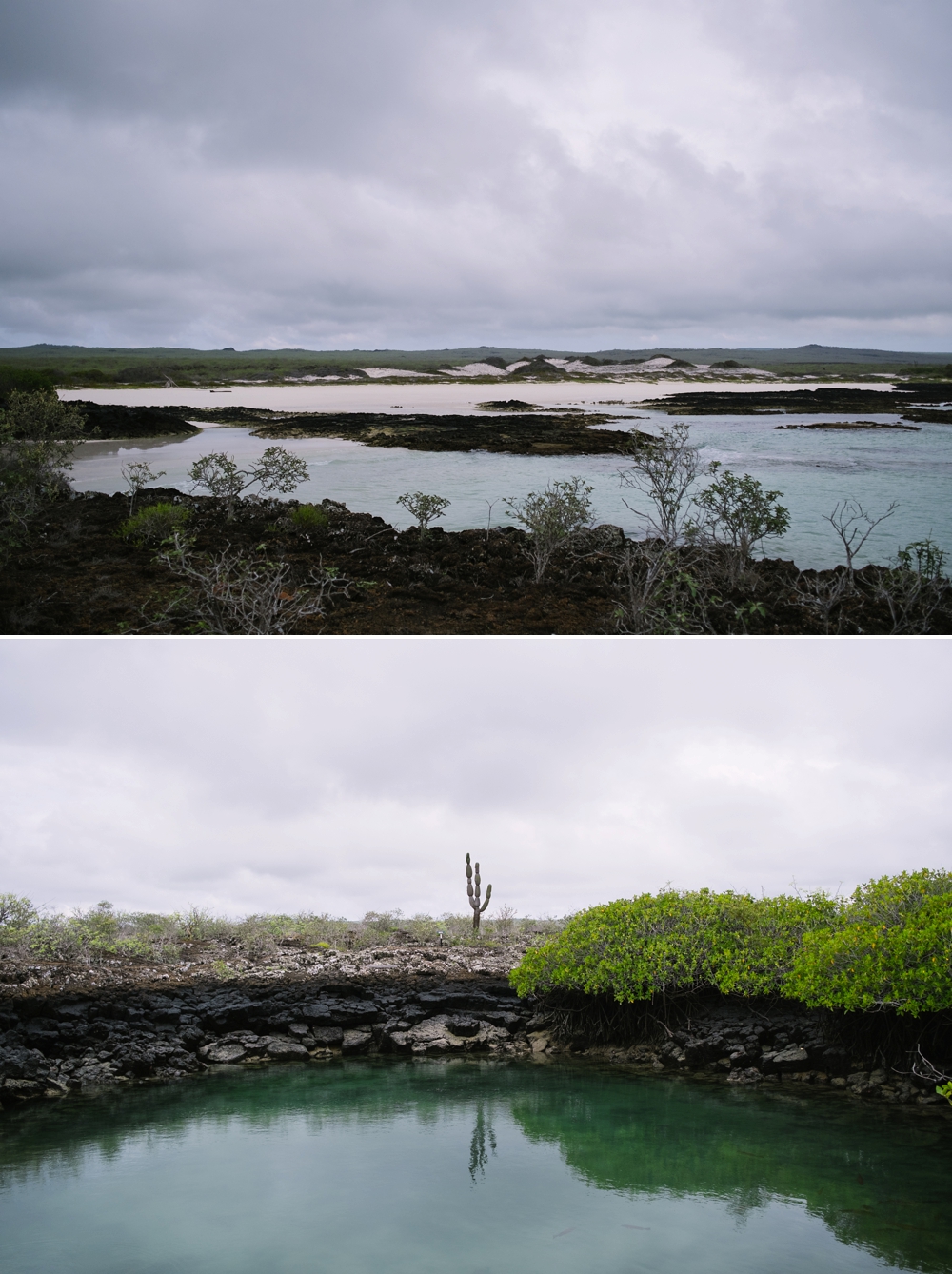 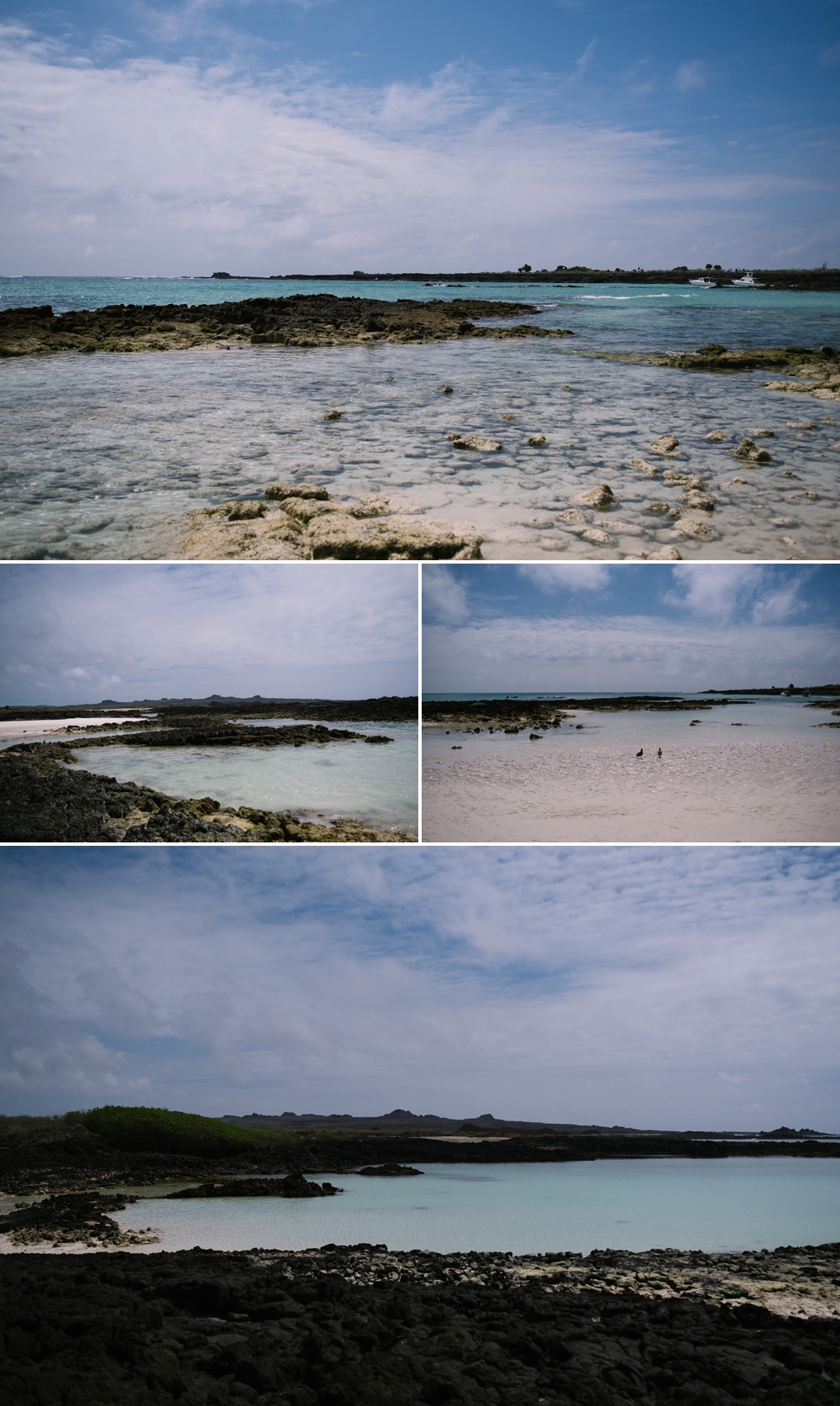 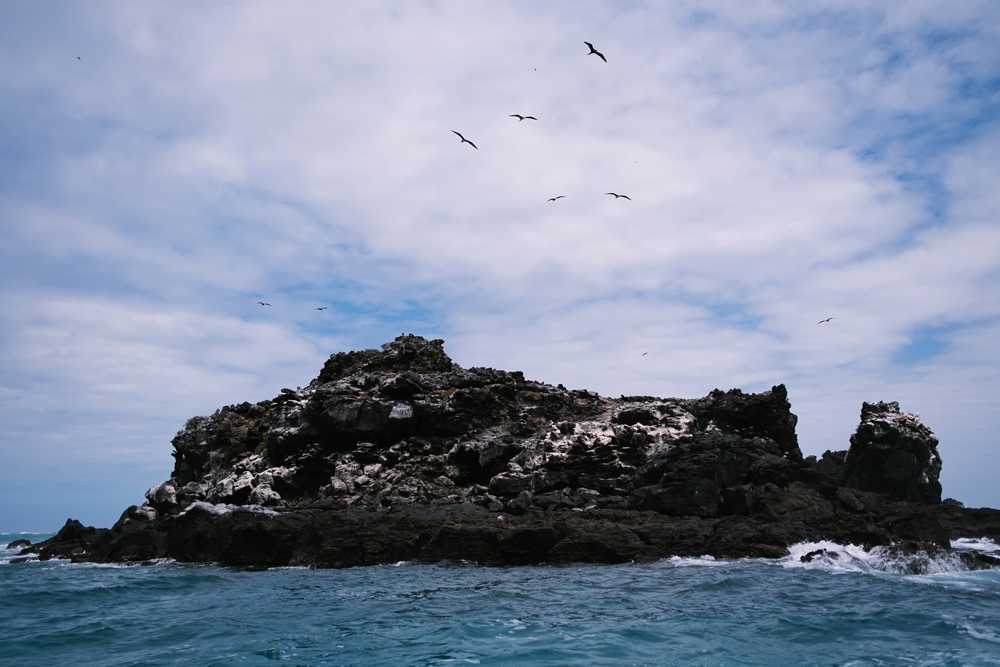 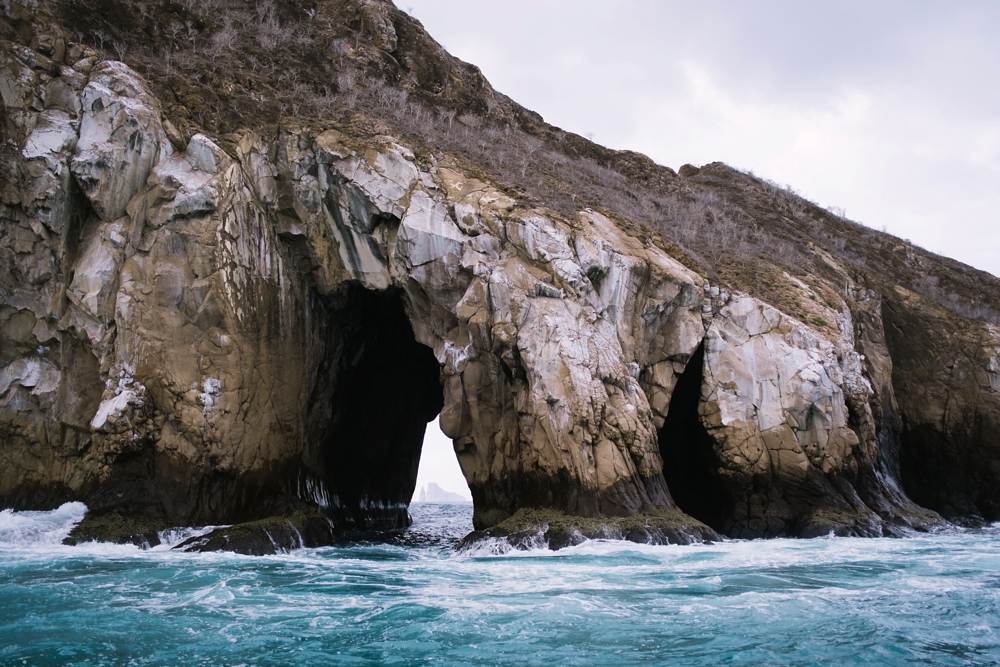 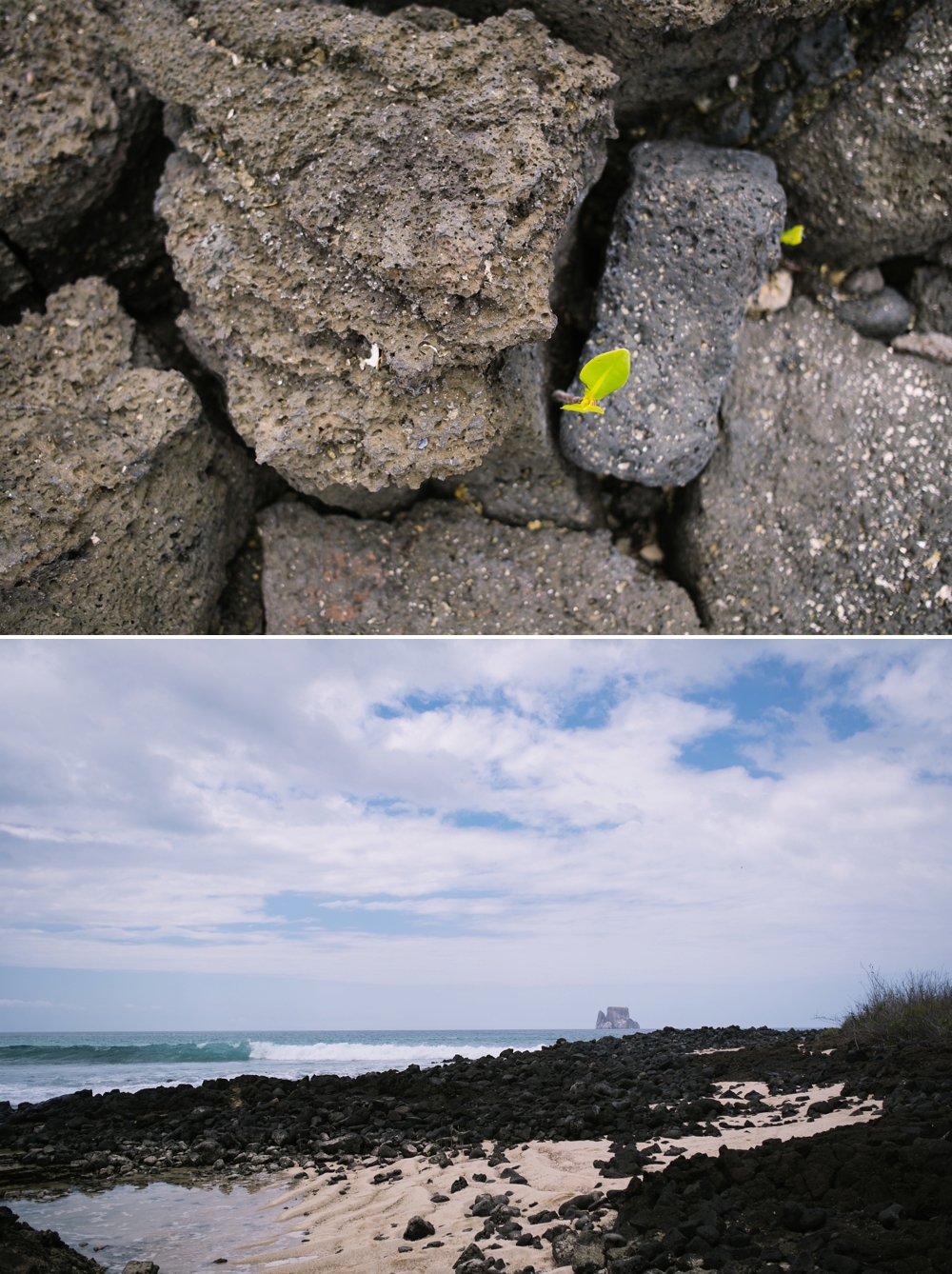 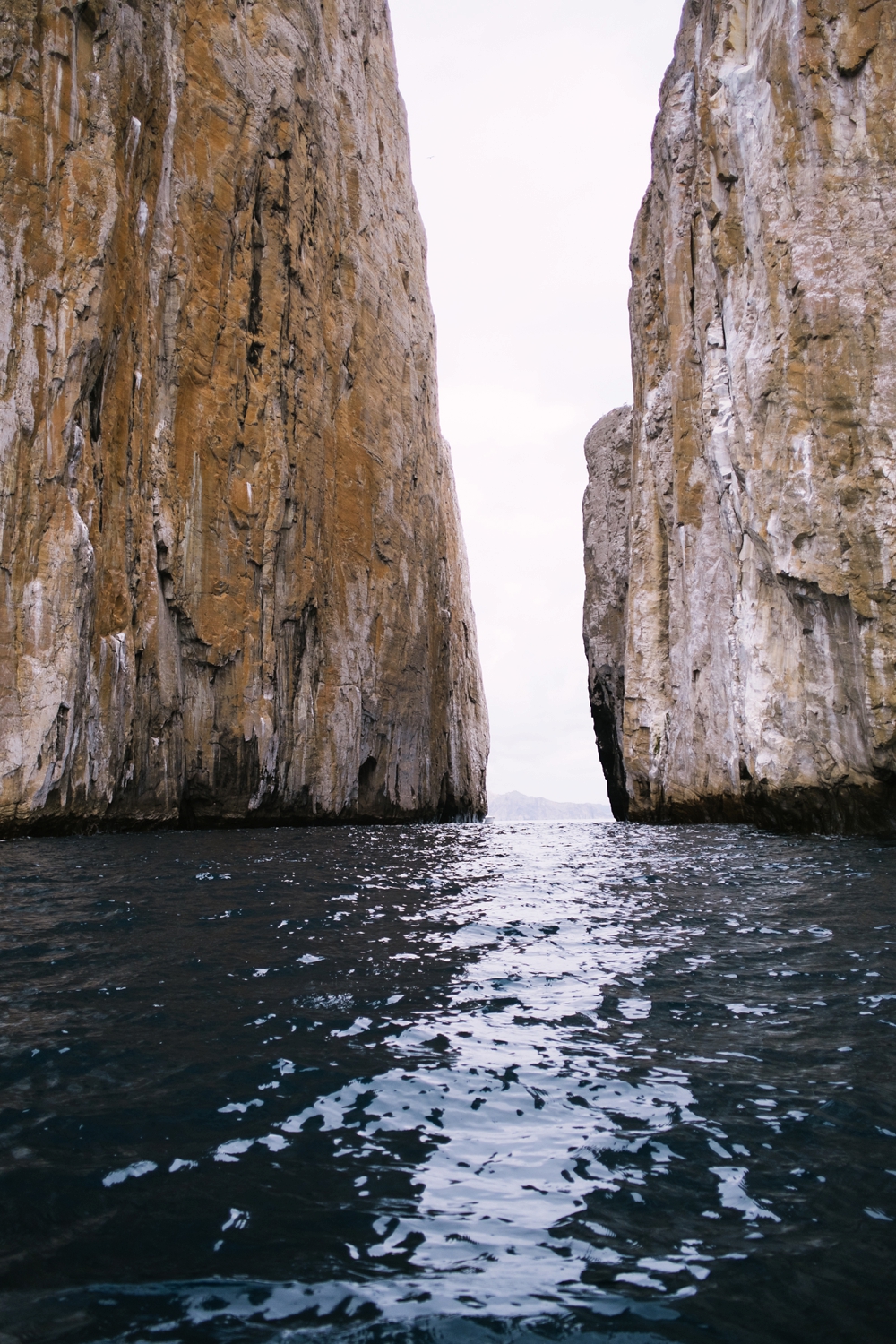 There are some great restaurants in Puerto Baquerizo Moreno as well! We had gotten used to the almuerzos (lunch meal) on mainland Ecuador and were happy to find them available in Galapagos as well. Since we tend to wake up so early we found a great way to save money when we don’t have a kitchen is to go around 11-11.30 to eat almuerzos normally around $5 and then go to another place for early dinner around 5pm for almuerzos again. We figured we could always have a snack later if we needed something else.

There is also an amazing burger place called Cri’s Burgers that was really delicious and filling after a whole day of snorkeling & swimming cause we were starving!

Finally our time on San Cristobal was coming to a close. We packed our backpacks up and we were ready to head back to the port to take our ferry back to Santa Cruz but that would be too easy and honestly not nearly as entertaining…. nope. We stepped out of our hotel and I took about 3 steps before falling into a hole. Yup! When I say falling I am talking about “a slow motion, my foot is stuck in a hole and I am carrying too much weight to regain balance in any possible way” falling. I fell and landed on my back on top of my backpack and felt like an overturned turtle. I knew something was wrong with my foot because I silly enough decided I was gonna wear my flip-flops because well it’s Island life right?!

Ooooh let me tell yooouuuu the hole took my pride and my toenail with it! (Also I totally took a photo of my toe but decided it was better not to post it. lol)

I have learned my lesson… I am not a balanced or graceful enough person to wear flip flops while carrying any amount of weight.

We ended up calling a taxi. A much wiser decision at this point and stopped by a restaurant that gave me some ice for my swelling and bleeding toe.

We did make on the ferry for our two hour bumpy boat ride back to Santa Cruz Island just minus some blood, sweat & tears I left behind.